The Nike Zeus system was based on similar concepts to the Nike Ajax and the Nike Hercules systems. The first radar was the Zeus Acquisition Radar (ZAR). One of its many features was the main Luneberg lens receiver aerial which weighed over 1000 tons. Due to its shear size, it was actually built as two individual components, a transmitter and a receiver. The transmitter was triangular in shape, with all three faces transmitting simultaneously as it rotated. Surroung the transmitter, was a 27.5m (90ft) high stainless steel "beam forming" fence. Located outside this fence was the ZAR receiver. This was a 25m (85ft) diameter antenna.

Despite the great size and capability of this radar, it still could not discriminate between an actual RV and a decoy. This job fell to another radar, which was strangely called the Discrimination Radar (DR). This was contained in a dome on a large square building with dual fences around it. This radar was one of the first to have a hybrid mechanical/electronic scanning capability. No one company could produce such monsters and RCA, Sperry and GE all made contributions towards their development.

Once the RV had been detected, the relevant tracking information was then passed to another two radars. The target-track radar (TTR) and the Missile track radars (MTR). These two radars are not as spectacular as the ZAR and DR and were essentially just scaled up versions of the equivalent radars used in the Nike Hercules missile batteries. The TTR was used to track the target on its inbound trajectory, while the MTR was used to follow the path of the Nike Zeus missile. Information from both radars were fed into a computer which determined the best flight path for the Nike Zeus missile to intercept the incoming RV.

At least two ZARs and DRs were constructed, one at White Sands and the other at Kwajalein. The ZAR at White Sands did not have the beam forming fence around it though.

The Perimeter Acquisition Radar (PAR) sole purpose was to detect incoming targets and to provide initial trajectory information to the computer systems involved in the ABM defence. To achieve, this the radar has a range of 1600km (1000 miles/1800 miles??? or 1800nm/3300km) 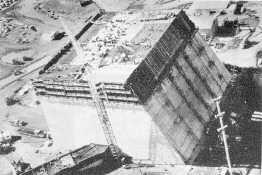 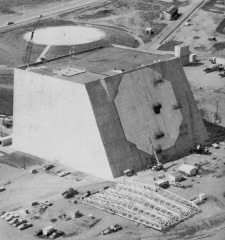 The PAR was developed from two earlier radars, the USAF AN/FPS-85, which had been operational at Eglin AFB since 1968 as well as an engineering development model that General Electric constructed at Syracuse in New York during 1969. Early plans had a string of PARs located across the US, but in the end only one was constructed. The one constructed only had a single phased array with an azimuth coverage of around 120° pointing in a northerly direction to detect the incoming warheads from the Soviet Union and China. It was intended that some of the other PAR, if they had been built, would have had two arrays.

The PAR is a truncated square pyramid some 62m by 65m (204ft by 213ft) long on each side and 40m (130ft) tall. The face of the PAR holding the radar array was tilted back at a 25 degree angle. This active array consisted of some 6600 dipole elements which are supposed to operate at 442Mhz with each element having a power of 1.1kW. The array itself is roughly octagonal in shape and is approximately 30m wide. A hardened underground power plant and an administration building were located nearby.

Once the Safeguard system was deactivated, the PAR was not turned off, but continued to function as part of the US space monitoring network and is still functioning in that basis today. 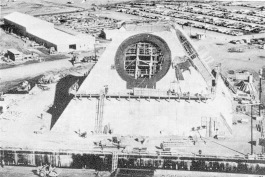 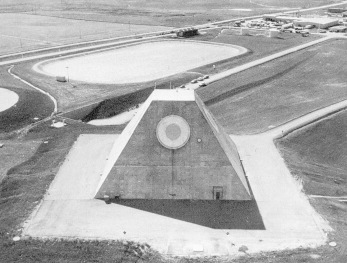 The MSR was a 23m/25m (79ft) tall truncated, reinforced concrete pyramid, built on an underground reinforced concrete building some 68.5m (231ft) square. Each side of the pyramid sloped at a 35 degree angle with a 4m (13 ft) diameter radar antenna. The sloped sides combined with concrete walls some 1.3m (4ft) thick, had the ability to deflect and withstand a nuclear blast. It had up to four radar antenna, one on each side, which when all four were installed, allowed it to have a full 360 degree coverage. Each face of the radar had 5001 phase shifters which operated in the E/F bands and had a range of over 1126km (700 miles/300 miles???). The redundancy designed into this radar was such that maintenance could be performed on the systems while it was still fully operational.

The first prototype MSR became operational at Meck Island at Kwajalein in September 1968 to support missile testing of the Spartan and Sprint missiles. This particular MSR was different to the operational versions in that it only two radar faces rather than four. One faced north-west while the other faced north-east.